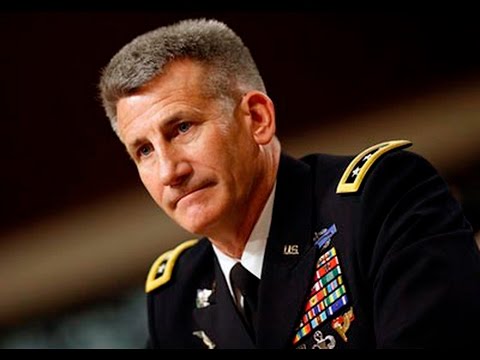 Gen. John W. Nicholson, the U.S. commander in Afghanistan in an interview with NBC news on Sunday said that Daesh militants are trying to establish a caliphate inside Afghanistan territory.

“Right now we see them very focused on trying to establish their caliphate, the Khorasan caliphate, inside Afghanistan,” said Nicholson.

According to Nicholson the U.S. has seen foreign fighters, mostly Uzbeks from the Islamic Movement of Uzbekistan and many Pakistani Taliban who the joined Islamic State Khorasan moving into Afghanistan to fight.

Nicholson said that Daesh is completely rejected by the Afghan people and it is in complete contradiction to Afghan culture.

“With our Afghan partners, we’ve been able to reduce that territory significantly and inflict heavy casualties on them to include killing their leaders,” he said.

Earlier Resolute Support said that Daesh was mainly present in Nangarhar province of Afghanistan and their numbers were around 1,000 fighters.

Nicholson also raised concern over the border region with Pakistan where insurgents are able to move across on both sides of the border which is mostly Pakistani Taliban, and Daesh militants.

A number of former Daesh and Taliban fighters who have recently joined the peace process in Nangarhar said the groups are supported by Pakistan and the members receive military training in the neighboring country.

They claimed that Pakistan’s Inter-Services Intelligence (ISI) is involved with the Taliban and Daesh, that they equip them and then send them to fight against security forces in Afghanistan.

Khalid, a former Daesh fighter, who joined the insurgent group in Haska Mina district in Nangarhar, said he received military training in Pakistan and was told to fight security forces in Afghanistan.

“They are no methods they haven’t used to kill people. They have experienced all ways of killing. What they do is against Islam,” he said.

Nangarhar MPs have said that the Taliban and Daesh have a grip on some areas in at least sixteen districts in the province.

Concerns have continued to rise after Daesh first emerged in the Achin, Kot, Haska Mina and Pachir Agam districts in Nangarhar.

Attaullah Khogyani, the provincial governor’s spokesman, said at the time that four civilians were killed and 27 were wounded. He said the insurgents also burnt down a number of houses.

However, ground forces and military air support targeted the group and killed at least 54, Khogyani added.

In July President Ashraf Ghani ordered the Afghan security forces to be ready for a “decisive battle” against Daesh in the eastern regions of the war-torn country.

Ghani also vowed to make sure sufficient weapons were made available to troops in their campaign against Daesh and other insurgents.

Be the first to comment on "Daesh Trying To Establish Caliphate In Afghanistan: Nicholson"

Send Us Your Story